Having exhibited at the South London Gallery in the group shows Independence in 2003 and Nothing is Forever in 2010, acclaimed American artist and reluctant pioneer of conceptual art Lawrence Weiner returned to the gallery with a solo exhibition ALL IN DUE COURSE. The exhibition was made up of a series of sculptures across the main and first floor galleries, as well as the outdoor area on the expansive Victorian brick wall of the SLG’s Fox Garden. Visitors were able to venture further; beyond the gallery to a nearby off-site work on the façade of the semi-derelict former Peckham Road Fire Station, located diagonally opposite the SLG.

Lawrence Weiner (b. Bronx, New York, 1942) lives and works in New York and Amsterdam. Internationally regarded, Weiner has an expansive following that reaches across several generations. Weiner has presented a number of projects and exhibitions across the UK since the early 1970s: at ICA, London; Pier Arts Centre, Orkney; The Fruitmarket Gallery, Edinburgh; The Henry Moore Sculpture Trust, Halifax; Art Transpennine, Hull; Inverleith House in Edinburgh; several engagements with Bury Art Gallery, including their Text Festivals; a solo show at the National Maritime Museum, London; and occasional shows in commercial galleries, the most recent at Lisson Gallery in 2013. Weiner’s work is also represented in the Tate collection, including as part of ARTIST ROOMS. 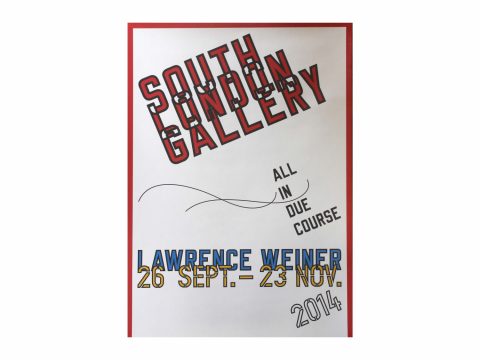 All In Due Course Exhibition Poster 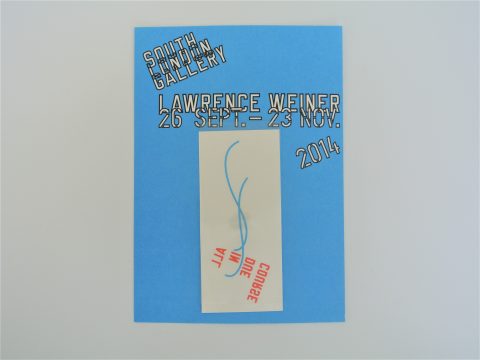 All In Due Course Temporary Tattoo