This panel discussion explores issues around gender in the workplace, inspired by an exhibition first presented at the South London Gallery in 1975. Women and Work: A Document on the Division of Labour in Industry 1973–75 was organised by artists Margaret Harrison, Kay Hunt and Mary Kelly.

With contributions from Dr Caitríona Beaumont, Adelaide Damoah, Andrea Francke and E-J Scott, the panel will explore how artistic, activist and curatorial practices can impact gender equality in the workplace and in the wider social context.

Revisiting Women and Work: A Document on the Division of Labour in Industry 1973–75

This event has been organised to coincide with Revisiting Women and Work: A Document on the Division of Labour in Industry 1973–75, an exhibition on display in the SLG Archive room from 13 November 2018 – 17 February 2019.

Documents including correspondence and installation photography from the exhibition are presented alongside a recent filmed interview with Mary Kelly by SLG’s REcreative Editorial Board and students from MA Culture, Criticism and Curation at Central Saint Martins.

Went to work, came back is the result of a six-month collaboration between the SLG’s REcreative Editorial Board and students from MA Culture, Criticism and Curation at Central Saint Martins.

To join the REcreative Editorial Board and help organise future events with REcreative, please contact: laura@southlondongallery.org
REcreativeuk.com is a free online network for young artists.

Dr Caitríona Beaumont is Associate Professor in Social History at London South Bank University and Director of Research for the School of Law and Social Sciences. Her area of expertise is the history of female activism, female networks/movements and voluntary action in twentieth-century Ireland and Britain. She has published numerous articles and chapters on these themes and her most recent publications include Housewives and Citizens: Domesticity and the Women’s Movement in England, 1928-64 (Manchester University Press, 2015) and ‘Housewives and Citizens: Encouraging Active Citizenship in the Print Media of Housewives’ Associations during the interwar years’ in C. Clay et al. (eds), Women’s Periodicals and Print Culture in Britain, 1918-1939 (Edinburgh University Press, 2018).

Adelaide Damoah is an artist whose current practice involves using her body as a ‘living paintbrush’ to paint or print onto various surfaces. Inspired by a desire to subvert Yves Klein’s ‘Anthropométrie’ series, Damoah engages in live performances using body printing and writing. Her most recent solo exhibition was Genesis with MTArt Agency, London, in 2018. In addition to making art, Damoah interviews other artists for her YouTube series ‘Art Discussion’. She is a founding member of the Black British Female Artist (BBFA) Collective and is represented by MTArt Agency.

Andrea Francke is a Peruvian artist based in London. Her work uses social art practice and pedagogical methods to re-think current structures by challenging assumptions about the inclusions and exclusions they perform. Previous projects include Invisible Spaces of Parenthood (2011- ), a collaboration with Kim Dhillon, which explores issues surrounding motherhood/parenthood in relation to new models for childcare; and the Piracy Project (2011- ), an international publishing and exhibition platform developed with Eva Weinmayr, exploring the philosophical, legal and practical implications of book piracy and creative modes of reproduction. 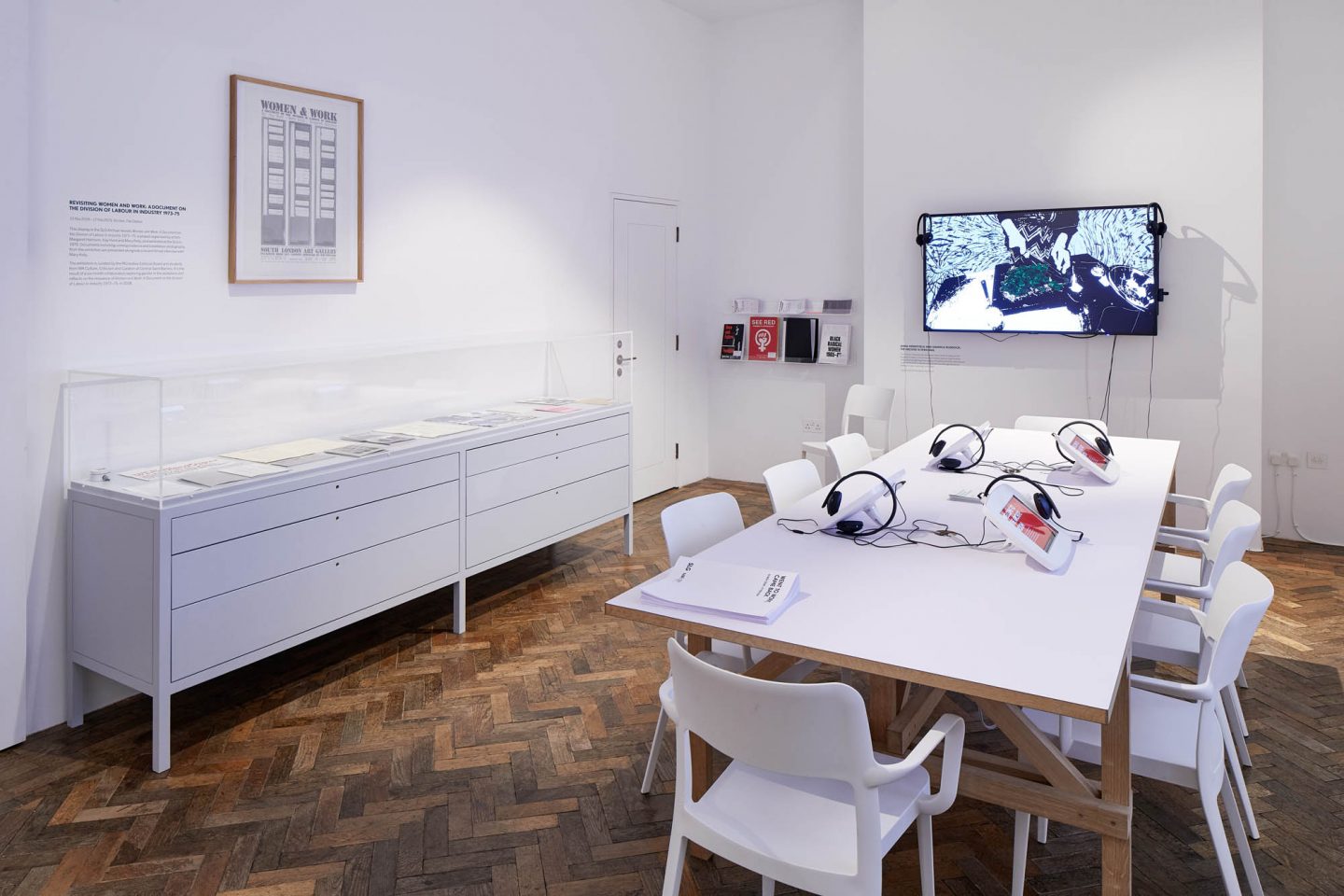 This display in the SLG Archive revisits Women and Work: A Document on the Division of Labour in Industry 1973-1975, a project organised by artists Margaret Harrison, Kay Hunt and Mary Kelly, and exhibited at the…