Chain-smoking plants and sobbing vegetables are among the objects that British artist Nigel Cooke sets against unsettling landscapes in new paintings in his solo exhibition, A Portrait of Everything, at the South London Gallery from 30 March 2006.

Cooke’s work combines painting conventions of the past with the illustrative styles of street art and children’s books to create obsessively detailed fictional scenes.

A underlying theme in A Portrait of Everything is the tendency of the human imagination to provide objects with personalities. Inspired by the way in which inanimate objects to come to life in children’s stories, Cooke’s paintings are lent a darker edge by birds, flowers, brains and sunsets depicted as drinkers and smokers. Not only have the objects outgrown the world of fairytales, but they inhabit a bleak adult world of addiction, overwork and sorrow.

Nigel Cooke said: ‘This show is engaged with ideas of time and its expenditure – work, free-time and fun – and their relationship to the business of painting, making it a very personal exhibition in some ways. The emphasis on genre and generalisations is important too: the paintings at first seem to be about grand themes, then turn out to be about other things entirely.’

In Fun, the improbability of describing such a subjective notion is captured in the image of strange pilgrims thronging outside a barn decked out with balloons and bunting. While they offer up a shabby pink skull and crouch in reverence, a giant grey plant chain smokes voyeuristically in the background.

It is unclear whether Cooke’s landscapes depict real space or are simply epic murals on walls beyond patches of wasteland. The rocks, trees, stones and ponds are highly detailed depictions but the ghostly figures that appear in Cooke’s work challenge the reality of the landscapes they hover above.

For example, in Studio Infinity, a pair of anachronistic figures appears to be burying a lemon-headed man, seemingly trapped in the pointless toil of interring a buffoon. With their ponderous outfits they could potentially be time travellers from a Breughel painting.

And in Food, the vast number of possible associations with the word ‘food’ is reduced to the image of a gigantic bone dumped on the horizon. There seems to be a knuckle joint at one end of the bone which on closer inspection is revealed to be a hooded human face smoking a cigarette. 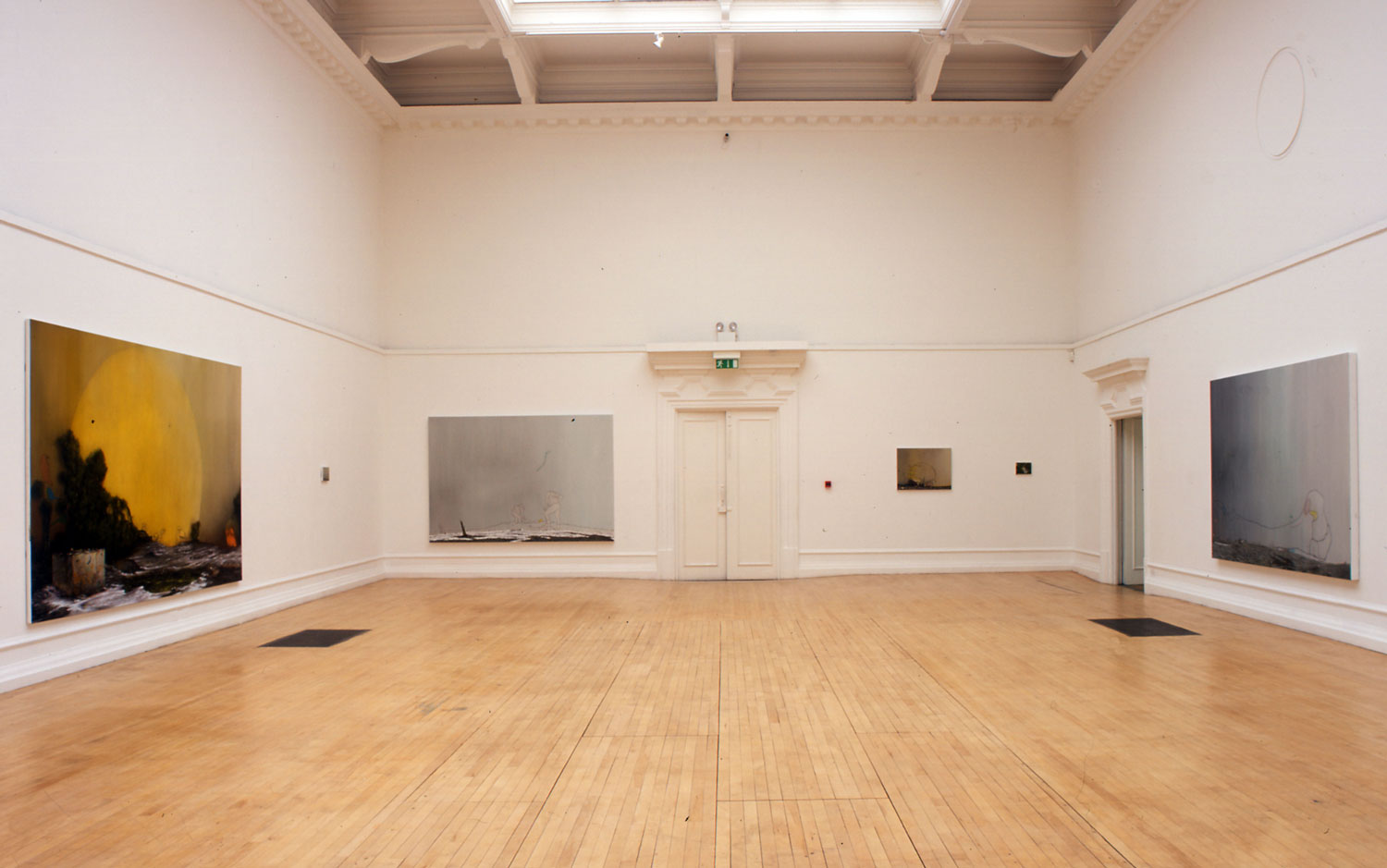 4 Apr 2006 Past event
COOKIES We use cookies to enhance your experience on this site. Find more info here.

Installation view of Nigel Cooke’s 2006 exhibition A Portrait of Everything.