Visual artists Betsy Dadd and Lydia CS are Kaleidoworks, an artist duo whose practice revolves around the participation of other people. From 2017 – 2019, the duo worked on three play projects on Elmington Estate as part of Open Plan, the South London Gallery’s long-term public art and education programme on neighbouring housing estates.

Each project culminated in a film produced collaboratively with local children, and these films are exhibited for the first time in the Fire Station as part of the Local History Weekend (displays continue until 9 Jun 2019).

Betsy Dadd and Lydia CS discuss making the three films with SLG Art & Play Leader Samantha Lippett, celebrating the relationships they built in the process and the spontaneous, often joyful outcomes of working with children.

Betsy Dadd (BD)   Our first project on Elmington Estate presented us with probably the most challenging conditions. Being January, it was cold and the nights drew in fast, so we were trying to find ways to make the playground an enticing place to be and challenge those negative preconceptions about public space at night time…questioning those ingrained behaviours that mean we are less likely to interact with strangers after dusk.

Lydia CS (LCS)      So we decided to embrace the darkness and play with it as a material. It became a backdrop for various luminous objects. We were excited by making the playground environment something that flickered with light and attracted children down from their houses. There was a nice moment when a mother and her young child were attracted by the fluorescent lights as they walked by, which led them to come and see what was going on, get involved and make new friends.

With the cameras, torches and glow-in-the dark objects, the children made obscure and abstract films. They found ways to draw with streams of light, they captured coloured lightbeams on film by throwing glow sticks off the climbing frame and blinded the camera with strobing torches. I even remember two boys adorning their bike and scooter with glow sticks and whizzing around.

BD     It felt really positive to still be out there, in the face of winter, allowing the kids to keep the spirit of play alive.

LCS    Returning to Elmington playground in early autumn meant we could capture the play and games that happen there daily. The children were given balls, hula hoops, bamboo, ribbons, tape, scissors, rope, foil, skateboards and buckets to inspire new games or adapt old ones. There were also numerous cameras handed out to record their play that often become part of the games themselves. I remember a game that was invented by attaching the cameras to balls, which the children threw into a moving bucket. Ribbon, rope and chalk were used to visually mark out routes where the games had taken place and became maps for the cameras to follow on skateboards or zip wires.

This project illustrates the play theory ‘Edge of Chaos’, which describes how deeply play transcends rules or structure, happening between order and disorder. This was revealed through these sessions, watching the busy playground and how the children navigated the space. As an onlooker it appeared hectic and chaotic, but on closer observation you realise all their games are weaving in and out of each other in synchronicity. I remember watching running, skipping, chasing, hula hooping and imaginary games all taking place on the same patch of ground, but never any collisions. Play would cluster and disperse in a beautiful and improvised way.

We wanted the edited film piece to reflect this observation, so found ways to make the footage layer, overlap, weave and interrupt like the children did in the space. I guess in this way, the editing decisions took lead from the children and the film emerged through spending time witnessing the playground and working in response to their footage.

BD    At the time of being asked to do this project we found out about some redevelopments soon to take place on the site. It prompted us to think about this as a key moment for the children as the playground potentially transitions. It felt like an opportunity to look back at all the things that have happened on site, as well as to reflect on what the playground space means to them and think about their wider neighbourhood and more personal futures.

This led us on to think about child-friendly ways of archiving, framing the act of film and sound-recording, as though burying a time capsule…making ‘films for the future’.

When I mentioned to Maame (age 8) about her films being part of an archive, she frowned at me and said, “What, you mean beehive!?” I love how children quickly remind you when you’re slipping into adult language or art speak. It’s hard to tell how much they understand, or care, where the films might go or be seen in a gallery context, but I pursued the line they were to be kept and looked back on by our future selves, as a memory of here and now.

LCS    Whilst editing After Dark and Mapping Games we often wondered about how we could invite the children into the editing process in a fun and meaningful way. This felt like the right moment to do it. By pitching a post-production tent on site, they could watch the accumulating bank of footage and react, reflect and select shots. This new phase felt like an important part of the archiving process – getting the kids to confront the images, rather than previous projects that had focused much more on playful uses of the camera.

BD     The video-tent also became a sound booth. In here we set up a recorder and microphone capturing the children laughing, asking questions, and trying to decipher the footage. Their voices don’t necessarily narrate what they can see in a logical way, but goes beyond this and adds another layer of personality. Their ‘off kilter’ conversations and meandering monologues about rainbows and planets and hoola hoops in trees somehow capture their age and relationships in a way the footage cannot alone.

Wanting to avoid logical timeline editing, we used green-screen apps to play with an experimental mish-mash film-collage approach, layering footage in surreal and magical ways. Fluorescent green shapes on the tarmac became portals to other scenes; green balls looked like peculiar holographic spheres, swathes of fabric appeared like hovering films in the sky.

The footage became an interesting combination of documentary and sci-fi, playing with truth and fiction, reality and imagination. The collection of material becomes an archive of their play and experimentation as well as a way of bottling memories of themselves, the locality and how the playground exists now.

LCS    It will be interesting to see the children’s response to watching themselves and their own work installed in the gallery. We have found them admirably unselfconscious and ‘in-the-moment’ throughout these projects; being absorbed in the activity of making and playing rather than thinking beyond that towards an audience or a finished film.

BD     This is something we have really enjoyed and have learnt from ourselves, but it also feels important to invite the children and their community in to see the Elmington neighbourhood positioned within the South London Gallery and the archive being something which is open, current and living and changing with the locality.

LSC   All of the three moving-image pieces become ‘films for the future’ and as a collection, trace the memories and happenings over this period of time. Soon these scenes will quickly become dated and their families can be connected to this archive long term, so they will have access to what is their own local history. We were talking about how it would be good to find a moment in the future to re-screen these works on location, offering a glimpse back in time, in of everyone’s kitchen windows.

BD     In fact, Mohammed (age 8) came up with this idea. When we were suspending the huge piece of chroma green fabric between two lamp posts one session, he suggested bringing the projector out from the video-tent and creating an open air cinema in the square… let’s remember this and see if we can make this vision come true. 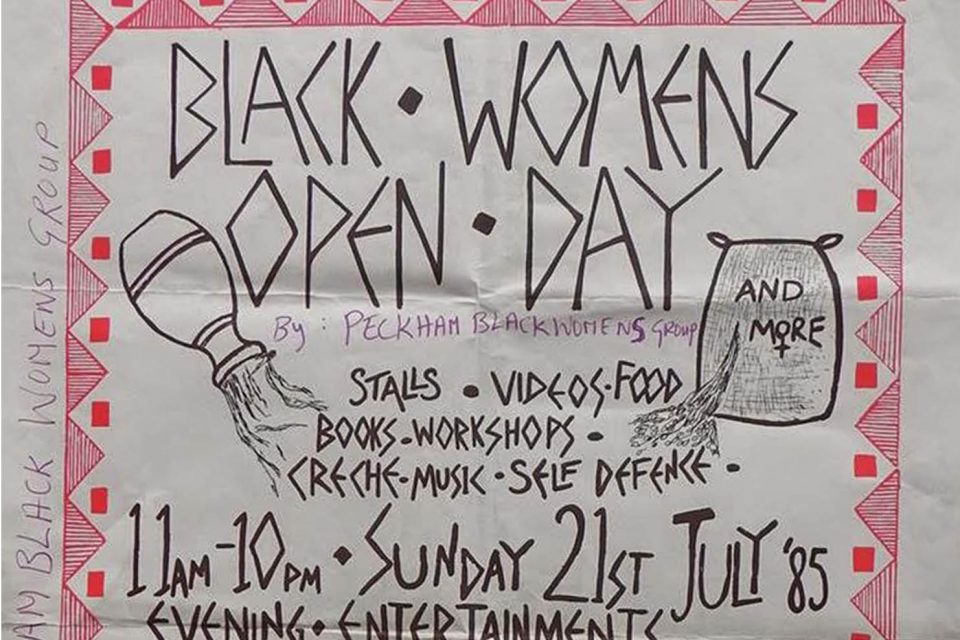 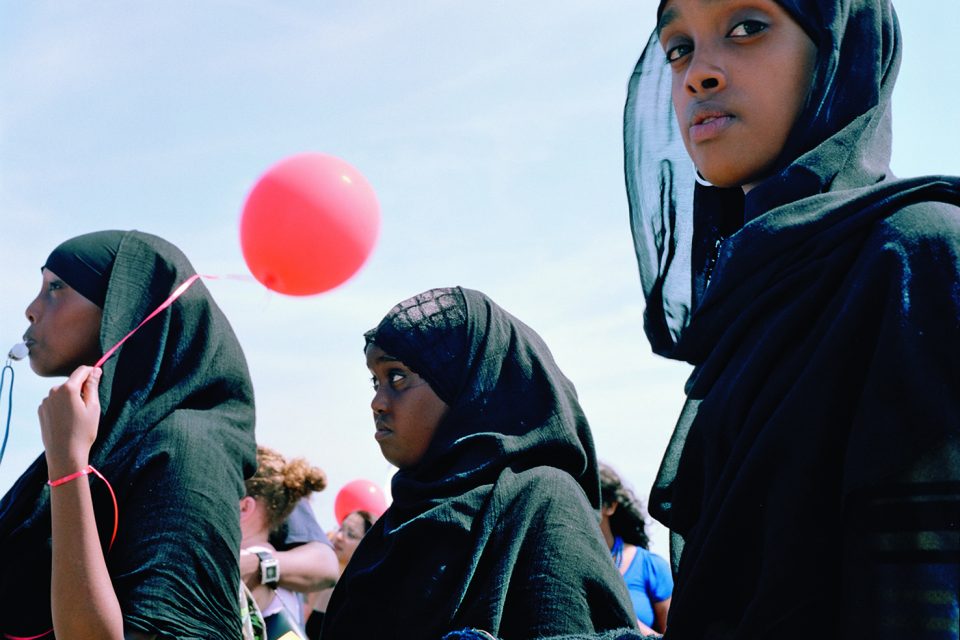 Phoebe Blatton, 9 Jul 2019
COOKIES We use cookies to enhance your experience on this site. Find more info here.